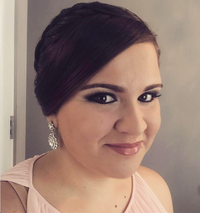 Juliana Ivette Cruz Martínez is a first-year graduate student in the Spanish, Italian, and Portuguese Department. She earned her B.A. in Hispanic Linguistics from the University of Puerto Rico, Río Piedras, where she did her Honor Thesis about the use of the velar /r/ and the attitudes towards it among Puerto Rican speakers. She was also a Mellon Mays Fellow at the University of Puerto Rico. She is interested in Sociolinguistics and Sociophonetics; specifically in prosody, linguistic attitudes, and language/dialect contact in U.S. Spanish. Juliana is a proud Boricua from a countryside town called Naranjito and she enjoys traveling around the world.